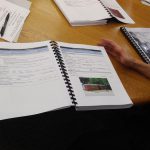 The weighty, 873 page-Phase 1 of Gregg County’s Historical Research Survey Plan speaks to how thoroughly historians and consultants crafted it, they say.

Volunteers and professionals working on the newly unveiled project presented the completed portion of the survey to county commissioners Monday.

Phase 1 plans focused on two Gladewater neighborhoods — the downtown historic district and the Main Street historic district. Consultants used maps, photographs and data to tell the stories of each building in those districts, making them eligible for national recognition from the U.S. Department of the Interiors as well as opening their doors to more tourists and economic development opportunities, said Survey Committee Chairwoman Linda Daniels.

Daniels described the documents as a “living document” and a long-term project to survey all of the county — a state mandate for historians in all 254 counties, though survey volunteers say only a handful of Texas counties completed as much as Gregg County.

“It’s always updated and resources that are 50 years or older qualify to be surveyed,” Daniels said, “so this includes buildings, cemeteries and other items of significance so that’s why it’s so important to have a plan for continuing the process.”

It cost nearly $17,000 to finish Phase 1, with financial help from county commissioners as well as sales of books written by Gregg County historian Van Craddock, Daniels said. The Gladewater Main Street program and the city of Gladewater supplied in-kind resources.

Senior architectural historians Elizabeth Porterfield with Hicks and Co. and Beth Valenzuela with Terracon guided local volunteers through the process.

“We’re very pleased with their work,” Daniels said. “The historians were quick to answer our phone calls which is very unusual these days … We felt they were thorough and attentive to their work and we got a lot of value out of it.

“This is 873 pages of information,” Daniels told commissioners. “All of this work meets the Texas Historical Commission criteria and will be included in the state’s database.”

Volunteers paid homage to the late Alice Janet Pursley Davis, who until her death on June 2 guided the yearlong project, they said.

“She did a lot of research to compare what other counties and cities had done,” Daniels said. “She called each one and had them evaluate how well their team had done.”

Volunteers also expressed appreciation to city of Longview Planner Angela Choy, who is liaison to the city’s Historic Preservation Commission.

The Gregg County 2018 Historical Resources Survey will be made available at area libraries, museums and online at co.gregg.tx.us .

Gregg County Historic Commission members say they have yet to decide what part of the county will be surveyed next. A historic survey of buildings inside the city of Longview has already been completed by the city’s Historic Preservation Commission.

You can see the full survey posted online at the Longview News Journal website.