AUSTIN (KXAN) — Underneath all the dirt at the SH 45SW Project is something particularly special–the Edwards Aquifer recharge zone. In order to make sure this water supply is preserved, the Central Texas Regional Mobility Authority (CTRMA) has hired environmental scientists to observe construction on the project–basically environmental police officers. They’re on-site daily making sure work is safe and compliant in work zones, especially around caves.

“Caves and sinkholes and solution features that occur on the surface… they’re pathways to recharge the Edwards Aquifer,” explains Ed Rashin an environmental scientist working on the project.

Environmental concerns were the basis for a lawsuit that was filed last year by Save Our Springs Alliance and other plaintiffs in an effort to stop construction of two projects that had already received environmental clearance—the SH 45SW Project and the MoPac Intersections Project—as well as the environmental study of the proposed MoPac South Project.

A federal judge issued a ruling in favor of the CTRMA and the Texas Department of Transportation (TxDOT) which allowed for crews to move forward on the construction projects. For those worried about the environment and animals, the CTRMA says they’re taking the utmost precautions with this project.

“This will be the most sensitively developed and constructed in roadway ever in Central Texas, if not in the state of Texas,” says CTRMA executive director Mike Heiligenstein. “We wanted to maximize the oversight from the environmental stand point there are a lot of environmental features on this road.”

Several caves within the path are marked by a black tarp already protected naturally by plants and rock, they’re also sectioned off by a wire fence. Work is prohibited within 200 feet of these spots. To keep construction vehicles from driving through and damaging the creek bed, a temporary steel bridge has been constructed to help construction vehicles cross Bear Creek. To keep any dust or dirt from getting into the water they’ve actually put down concrete barriers.

Special pavement will help filter runoff before it reaches filtration ponds along the highway. Contaminants will settle to the bottom and clean water is released back into the environment. Silt fences also line the entire stretch of the project to keep dirt from washing off the job site during rain events.

Work is expected to be complete in 2019. 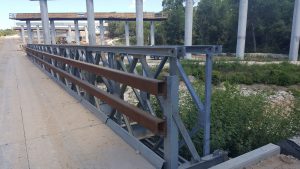